The On/Off switch is a method of survival where an individual…. okay let’s not beat around the bush. I don’t know who else has an emotional and mental on/off switch but I certainly do.

Some people refer to it as the “nothing box” but I don’t think it is the same thing. Usually you have to place entire situations or people into a nothing box. Some people also refer to it as “compartmentalizing” which is also not the same thing. The on/off switch is not about sectioning off contradicting thoughts/morals/situations in order to handle them. That my friends, is simply called life and being a mature adult to make sure your shit is handled. You can’t stand a certain person but you compartmentalize your hatred in order to meet a deadline for work? We all do that.

No… the switch is definitely something else entirely.

Why do I bring this up, you ask? Because it goes hand in hand with Lowin’s internal battle of trust issues and anxiety.

The on/off switch is how I manage my anxiety, fear of disappointment, and trust issues. Is it the best coping mechanism? Hell no. But it works. Which is the part I hate the most. I don’t necessarily want to have control over this switch. Especially if you do not have a significant other that is there to lean on and help you deal with any assortment of events. As I started to say earlier, it is in fact a method I’ve learned to survive and that is actually true.

So what is it like to have anxiety? It is a mind consumed of worry and very sensitive reactions to emotions. I don’t mean that I am bawling at every Disney movie and I’m not talking about PMS. In fact, it sometimes isn’t even about my own emotions. I am anxious of how others feel, think, judge, react, etc. The worst is non-reaction. I can handle someone being angry, pissed off, yelling, disappointed, happy, enthralled, excited, sad…because I know exactly what they are thinking and feeling and I know how to react to that. I actually enjoy a good tiff every now and then. If you care enough to argue with me, I can respect that and come to a point where we agree on the topic or event at hand. Hell, I will even apologize and make sure it doesn’t happen again. Confusing right? I know.

But silence…silence allows my mind to wonder and it will formulate the worst gut feelings and panic that you could imagine. If you don’t want to have a conversation or reply to me…I will make up your side of the conversation for you and guess what? It isn’t pleasant. Walking on egg shells sucks. There is absolutely no humanity or connection in being pleasant all the time. Nor is it honest. 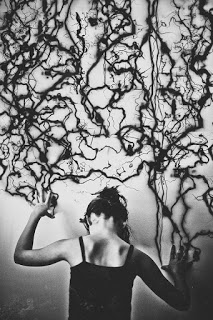 If you have ever experienced anxiety, or more importantly, an anxiety attack…I think you would agree that this photograph depicts it perfectly.

Anxiety is more than just an emotion. It isn’t a racing heart beat and shaking. It can feel like a hundred weighted obligations that start to pull you in a thousand different directions. You start to promise yourself things you will or won’t do anymore, how you’ll handle it better next time, how you need to fix the situation at hand. It is being frustrated easily. Anger comes next when you aren’t sure how you are supposed to feel. It wins when you aren’t sure if your anxiety is a valid reality or if you are just being over dramatic. Then you start judging yourself before anyone else has the chance. Each decision we try to make while we are having an anxiety attack will spiral into another thought and another sinking feeling that we are being suffocated and losing control.

This is why it is important for people that have family and friends with anxiety moments, to understand this uncontrollable domino effect when it happens. They need to be able to silence your head and your mouth when you start losing control.

Let’s tie the trust issues into a nice little bow on top of this so it makes more sense and then you’ll see how it is all relative to the on/off switch.

So I have anxiety that leads to panic and severe judgment of myself. We can skip the rocking back and forth, discussing childhood/teenage events and how many cats I have during this session because why I have anxiety is irrelevant for this post.

Those three things cause trust issues. Now, don’t go comparing me to those girls that stalk their boyfriends, hack their phones, and think they are being cheated on 24/7. Any feeling that I needed to become one of those girls would just end in you having a very large bed to sleep in by yourself, whether it was for a night or forever isn’t really relevant to this post either.

No, trust for me is emotional and mental. I find it hard to trust that my significant other will not judge me. I don’t trust that someone can ask a question without ulterior motives. I have trust issues that people will not execute promises they make. Allowing myself to rely on someone or to have an actual expectation of them is hard for me. How many people do you know that would drop everything they were doing if you told them you needed them? Just a random…I can’t explain it but I’m falling apart and I really just can’t be alone right now. You don’t know anyone that would do that and come running? I know very few. Point proven. Except I always end up being that person that drops and runs. That’s part of trust. Knowing that someone, anyone, just one person would be there for you when you are not having a good day or a good week. Someone that can see the darkness inside of you and not think it’s to much work…that they aren’t going to get enough out of the situation to continue.

So when you do put forth the effort to actually start trusting someone enough to tell them when you are weak. To not hide the anxiety. That’s when the entire things becomes an automated loop of disaster.

Panic sets in because we actually allowed some of that to surface and then we didn’t get a response. Or maybe it is those brief seconds when we are waiting for the response…because those seconds seem like hours where we are unable to breathe. We are vulnerable. Can you imagine what a day or two days feels like? Try years. 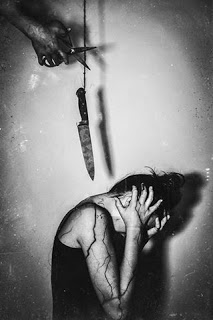 Either the knife drops….or it doesn’t. And that my friend, is where we bring back in the On/Off switch.

Maybe the end result of the situation was an argument. Yes, I can handle that. Maybe they were understanding and just sat in silence next to you, a silence you needed. Reward and punishment put anxiety in check. Anxiety isn’t about not being perfect, it is about not being understood or accepted.

However…if the knife drops and the situation isn’t handled. It is ignored. Without response. Or makes said person (me…) feel like they are slipping further away from him or further into this terrible cycle of anxiety by feeling hurt, betrayed, or let down…we flip the switch.

Sometimes pain is good. It makes you feel alive and reminds you that you are human. But pain is only good when you can feel other things like love and respect. If you don’t feel needed, respected, loved, or wanted…what good is the pain?

I know I have rambled and ranted and probably not made much sense. But that would fit perfectly to an attempt to describe anxiety and panic, right?

Sometimes…you just have to put the mask back on and pray the person you need the most, knows how to fix the switch when you find them.

Looking for something specific? Don’t waste any time.